I do NOT represent any ecumenical or organised church’s position. These are my own personal beliefs, and no one else’s. They are what I feel. You are free to disagree. I have been a Christian for over 40 years now, and I hope that this paper both teaches, and edifies. These are my own principles and guidelines.

As Christians, we do not have the luxury of picking scriptures we think are good while ignoring others with which we do not agree. I affirm, that I believe the Bible is the living and true testament of God, given as a love letter, to his followers. It is the FINAL authority. 2 Timothy 3:16-17 tells us “ALL Scripture is God-breathed and is useful for teaching, rebuking, correcting and training in righteousness. So that the man of God may be thoroughly equipped for every good work. (NIV)”

Let’s start with a definition. What is homosexuality? Homosexuality is the sexual attraction of 2 individuals of the same sex, for the purposes of sex and/or romance. In and of it self, it seems innocuous, and is very prevalent in our society today, especially with the repeal of Don’t ask, Don’t tell.

What does the Bible have to say about homosexuality? The old testament (the holiness code from Leviticus chapters 18 and 20) scriptures are clear on the subject. In addition the New Testament also weighs in:

26 Because of this, God gave them over to shameful lusts. Even their women exchanged natural sexual relations for unnatural ones.

27 In the same way the men also abandoned natural relations with women and were inflamed with lust for one another. Men committed shameful acts with other men, and received in themselves the due penalty for their error. (Romans 1:26 NIV)

Consider for a moment:

“Be imitators of God, therefore, as dearly beloved children and live a life of love just as Christ loved us and gave himself up for us as a fragrant offering and sacrifice to God.

But among you there must not be even a hint of sexual immorality, or of any kind of impurity or of greed, because these are improper for God’s holy people. Nor should there be obscenity, foolish talk or course joking, which are out of place but rather thanksgiving. For of this you can be sure: no immoral impure or greedy person — such a man is an idolater – has any inheritance in the kingdom of Christ and God. Let no one deceive you with empty words. for because of such things God’s wrath comes on those who are disobedient. Therefore do not be partners with them.” — Ephesians 5:1-7 (NIV)

In the passage from Ephesians above homosexuality was equated with idolatry. Homosexuality worships the creation, ahead of the Creator. It puts the creature before the Creator in priorities. As I have listened over the years, a person’s identity becomes sexualized, before it can be submitted to God. Homosexuality misses the mark, because it puts something ahead of God in our priorities.

Some people view HIV/Aids as proof that God hates homosexuals. This could NOT be further from the truth. God hates sin (disobedience) and out of his loving kindness towards us says: Don’t do this.

Even Pope Francis has jumped on the bandwagon saying: “If someone is gay and he searches for the Lord and has good will, who am I to judge?”

Is the Pope infallible? Again what does scripture say:

For the time will come when people will not put up with sound doctrine. Instead, to suit their own desires, they will gather around them a great number of teachers to say what their itching ears want to hear. (2 Tim 4:3)

6 “But at the beginning of creation God made them male and female.’7 ‘For this reason a man will leave his father and mother and be united to his wife, 8 and the two will become one flesh.’ So they are no longer two, but one flesh. 9 Therefore what God has joined together, let no one separate.”

Jesus’ remarks are un-mistakable. Marriage is between one man and one woman. It was this way at the beginning of creation.

We are faced with many dilemmas in our modern society. We are confronted everywhere with sexuality and sexism, and me-ism! Should we shun these people? Do we avoid them? What should be our response to a society that tells us this is the right way to go?

Do we condemn, or condone? That seems to be the choices the church offers us today. Neither is correct. We offer charity. I have offered my hand in friendship to many who our on society’s fringes. Homeless, Alcoholics, Addicted, Gay, HIV/AIDS, the outcasts, the rejected, the forgotten elements in our society.

Through me, and my life, I have a place in the ministry to others. Not by people seeing my mouth flapping. By people seeing my life working. We are the only testament someone will read. How important is it to have Christ’s compassion indwell us, so that we can minister to those in need? My mouth will not convince anyone of God’s love. My life, will.

How is your life working these days? Does it send a warm inviting tone to people, or are they blasted away through our judgemental attitude and prejudices? Make it a priority in your life to be amongst those who bless people, (Romans 12:14) and don’t curse them.

Gay people are invited to listen, and to learn. But they should not be put in any leadership, teaching, or worship related functions in the church. Communion MUST be off the table, because of an unregenerate heart.

James 3:1 tells us: Not many of you should presume to be teachers, my brothers, because you know that we who teach will be judged more strictly.

Teaching is a privilege. I am divorced. The restrictions placed on me, was that if I wanted to continue to teach, I could never re-marry. For the sake of Christ and the love of the saints, I continue this way, because no sin is without consequence. This is the price I paid for divorce. Dr. Charles Stanley has the same restriction.

Let our lives extend an invitation to all the world.

14 “You are the light of the world. A town built on a hill cannot be hidden. 15 Neither do people light a lamp and put it under a bowl. Instead they put it on its stand, and it gives light to everyone in the house.” (Matt 5:14-15 NIV)

I have seen this posted several times on Facebook. 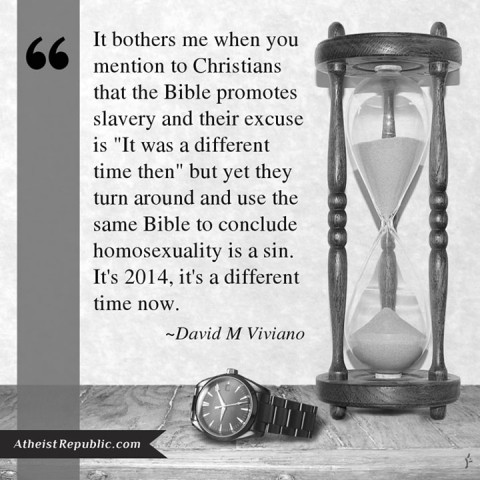 I’d like to respond. Slavery is a presumption in the Bible.

Were you a slave when you were called? Don’t let it trouble you—although if you can gain your freedom, do so. 22 For the one who was a slave when called to faith in the Lord is the Lord’s freed person; similarly, the one who was free when called is Christ’s slave. 23 You were bought at a price; do not become slaves of human beings. 24 Brothers and sisters, each person, as responsible to God, should remain in the situation they were in when God called them. (1 Cor 7:21-24 NIV)