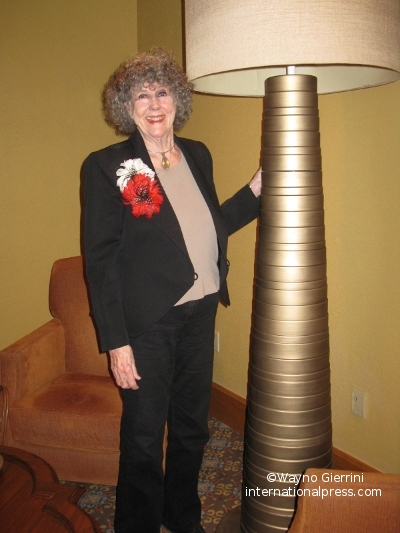 Most anyone who is part of the Autism Community, would recognise the name Dr. Temple Grandin. But would you reckognise the name: Eustacia Cutler?

Some people know immediately. Others have absolutely no clue who this person might be. Eustacia Cutler, is Dr. Temple Grandin’s mother.

Autism is a developmental disorder of the brain. As the brain matures, it becomes neurologically (wired) different then what is found in the Neuro-Typical (non-autistic) general population. Approximately 1 percent of the population (1 in 88) are affected by an Autism Spectrum Disorder.

I had a few moments with Ms. Cutler at a recent Autism conference held in Tucson. A charming woman, with a distinctive Boston accent.

The Politics of Autism

Autism and Politics. Why isn’t the political system doing anything to help?

There is a great deal that we don’t know. That’s why I am working to develop this fund, the Temple Grandin/Eustacia Cutler fund to support and guide all members of the family. I think basically Autism is a family dis-order.

This is one of the reasons politician’s don’t approach this. They want to be kind. But how do they do this? The part of the problem with the government is they are not always sure what is the most helpful thing to do? I am not sure either. They can’t take care of the situation. In the end, the family is going to take care of the situation. The family is the lynch pin.

This also means, school and therapists. But they [politicians] can’t handle the life problems. They can only guide people and teach them to handle problems themselves.

Changes to how Autism is diagnosed

Controversy surrounds proposed DSM (Diagnostics and Statistics Manual) changes to remove the diagnosis of Aspergers and roll that into Autism Spectrum Disorder. What is your opinion?

I am not in a position to evaluate it. I will watch it. My role is be an ambassador. To explain and listen to the doctors.

Temple is a visual learning. As a child, she was almost a “tape recorder.” What role did hearing playing in her learning process?

The organisation Autism Speaks. Do they help? Does they hurt?

Interesting question. People think differently. It’s corporate thinking. Of course they have done good. They have raised huge amounts of money. They have put a great deal of it into research. All help is good.

A followup question. On several websites, there are posts that say: “Autismspeaks does NOT speak for me.” Comments?

I have no way to appraise this. I see the tremendous need each of us has to hang on to our identify. The fear that particularly High functioning Apsergers have is losing themselves. Research will change them.

At a conference that Margaret Bowman did (from Mass. General Hospital) in Bakersfield California, a young Neurologist was talking about medications. A man stood up and said: “I am Asperger. Is the point of your research to do away with me?”

A final question. If you could leave one thought to the future generation about Autism, what would you tell them?