The politics of the 1970’s were as politically divisive, as they were polarizing. The protest movements borne of the Vietnam War, would help spark a revolution both on the political and social landscapes. It was part of dinner table discussions. We all sat around the television screen, as the Vietnam war unfolded on TV sets all across the nation. “How could these collage age Americans protest a war, thousands of miles away, while poor kids were being slaughtered?” They were branded by most, as cowards, and decidedly, un-American. “My country right or wrong, is still my country!” was the loud resound of my Father. I was not convinced.

A handful of millennials, grasp the underpinnings that played out in the early years of the 1970’s. We don’t see demonstrations these days, that fundamentally changed the political scenery. I am here to remind a generation of that metamorphosis.

There were always demonstrations regarding the unpopular Vietnam war. In late April, 1970, then President Nixon, desperately searching for an exit strategy, announced the American incursion of the Vietnamese War, into uncharted territory: Cambodia. The North Vietnamese Army (NVA) provided to be a formidable opponent. Many thousands of lives were lost in the span of 2 months.

This is my own story.

I would turn 18 in July of 1970. Before my birthday that year, was high school graduation. Many people waited till after graduation in mid-June to apply for a student deferment from the Draft. I did NOT wait. I applied for a student deferment 6 months prior to my birthday, in January. Because I had taken college level courses between my junior and senior year of high school, I demonstrated to the draft board, my intention on seeking higher education. The draft board took note of that, and I was granted a student deferment. That didn’t mean I was a draft dodger. It merely put off my eligibility for the military induction draft, until I had completed my education. It bought me 3 years.

Just after High School graduation in June, a few weeks later, in July, all student deferments were cancelled. I was okay, because I already had a student deferment. iI you didn’t have one, you would have to report for military service. I come from a very proud military family. My father having served 20 years in the Armed Forces of the United States.

Sandwiched in-between the amazing heroism of Apollo 13, and High School Graduation, was an event like no other. May 4, 1970, 12:22 eastern time. Four Students protesting the war’s incursion into Cambodia, were fatally shot. Civil disobedience wasn’t just something you saw on tv. These were kids my age, gunned down, for speaking and expressing an idea that was unpopular with most of America. Civil Disobedience once again had birth pangs. The Gay Rights movement gained a footing here from the unexpected sacrifice, at Kent State University.

Singers and Songwriters became spokesmen for my generation: Woody Gutheie, Bob Dylan, Joan Baez, Crosby, Stills, Nash & Young (CSN&Y), The Mamas and the Papas. “Four Dead in Ohio” by CSN&Y is a constant reminder of that turbulent moment in history. The sites and sounds of that day, are like last week.

This was close. This was personal. I was forever transformed. Many from the baby boomer generation, can still recall what they were doing that day. I was in my civics class. Being taught by a student teacher. A rabble rouser. Part of the SDS. (Students for a Democratic Society) One who spoke the truth that day, that I did NOT want to hear, but whose voice beckoned me to listen. To watch. To look. To cry. To finally understand, the true cost of civil disobedience: death at the hands of National Guardsmen. Exonerated from any wrong doing, they had fired 67 rounds in just 13 seconds. Their shots echoed far into the conscious mind for those astute enough, to comprehend. It echoed so deeply into my soul, that I knew I could NOT be a part of any war. I have remained a pacifist from that very day.

I can well understand the protests in Baltimore. The tree of liberty is watered with blood. This time, not soldiers. Innocent civilians whose only crime was not locking a goose step to the edicts expounded by the Nixon administration.

The current administration, led by Mr. Obama, is still clinching to an antiquated pattern of behaviour. Searching for an exit strategy, that doesn’t exist.

As a society we must decry the hypocrisy, and forge anew in our hearts, the purpose and cause of peace, that others so valiantly scarified.

“Warriors may be forged in the fires of battle but heroes are discovered in the most unlikely of places.” (The Light Brigade, Outer Limits) 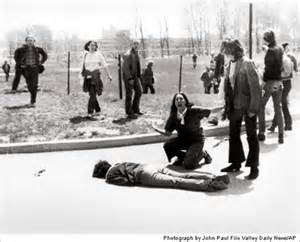 Other then becoming a Christian, this event would have a significant, long lasting effect, and play a very prominent role in my life.

Exercising First Amendment Rights, the students of Kent State University in Ohio, had gathered to protest the Vietnam War’s incursion into Cambodia.

The impact of this incident, coming just six weeks before my high school graduation, changed me utterly and profoundly. As I pondered the realities or war, wrestled with the meaning of life, I came to the realisation that wars solve nothing.

On that day, in that hour, I was transformed into a life of pacifism, by the sacrifice made by these individuals.

Wayno
On the 38th Anniversary.