Amidst a backdrop of monsoon weather today in Tucson, it would seem that is NOT the only thing storming in the Old Pueblo.

A handful of protesters gathered at the busy intersection of Campbell and Speedway, (near the University of Arizona’s University Medical Centre) to protest the Pima County Republican Party’s decision to raffle a Glock handgun, similar to what accused Tucson Shooter Jared Loughner used on January 8, 2011. Loughner’s is accused of killing 6 people and injuring 13 others that day, including 8th CD, U.S. Congresswoman Gabrielle Giffords (D). 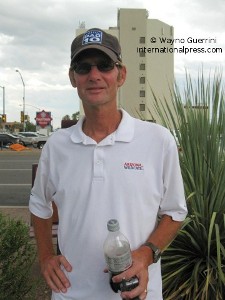 A surprise to many, was Ward 6 Tucson Councilman Steve Kozachik (R). Kozachik, himself a Republican, came out in support of the rally. He is the other side of the Republican party that does NOT agree with the raffle. 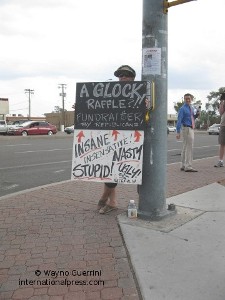 I interviewed Susan Thorpe, one of the protesters and she had this to say: “Raffling off a Glock as a fund raiser? I mean what an outrageous act to do. Why would you raffle off a Glock? Why would you choose to promote violence?” Calls to the Republican Party Headquarters in Tucson, remain un-answered. 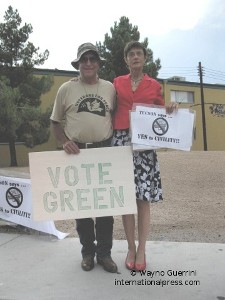 Green Party Tucson Mayoral Candidate Mary De Camp was also present at today’s rally and had this to say: “I think the Green Party should auction off a gun safe. I respect the right of other people to bear arms, though I am a pacifist myself….we do have non-violence as one of our 10 key values.”

It would seem that no one in the Pima County Republican Party wants to own this. There is much conjecture and speculation, why this was done. Councilman Kozachik said: “Why not raffle off an ipad?” The already splintered Republican party, heads into the Novemeber elections, in just a few short weeks.